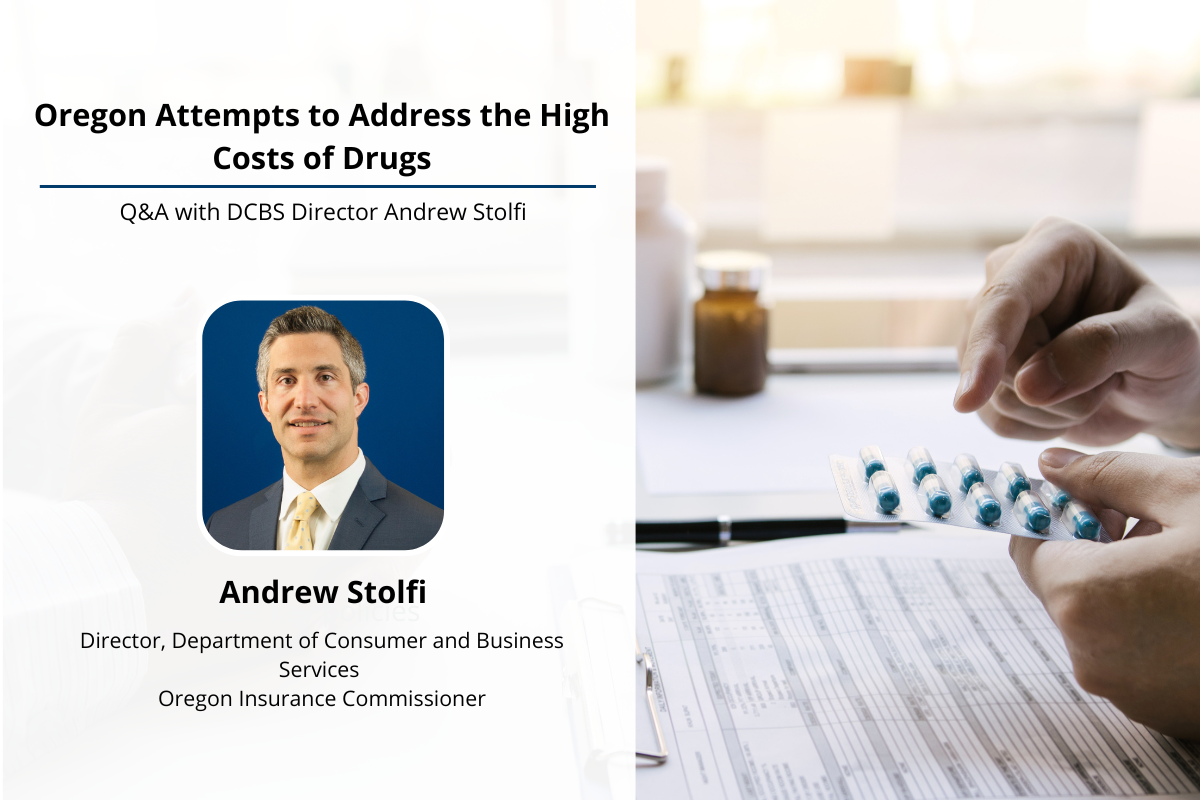 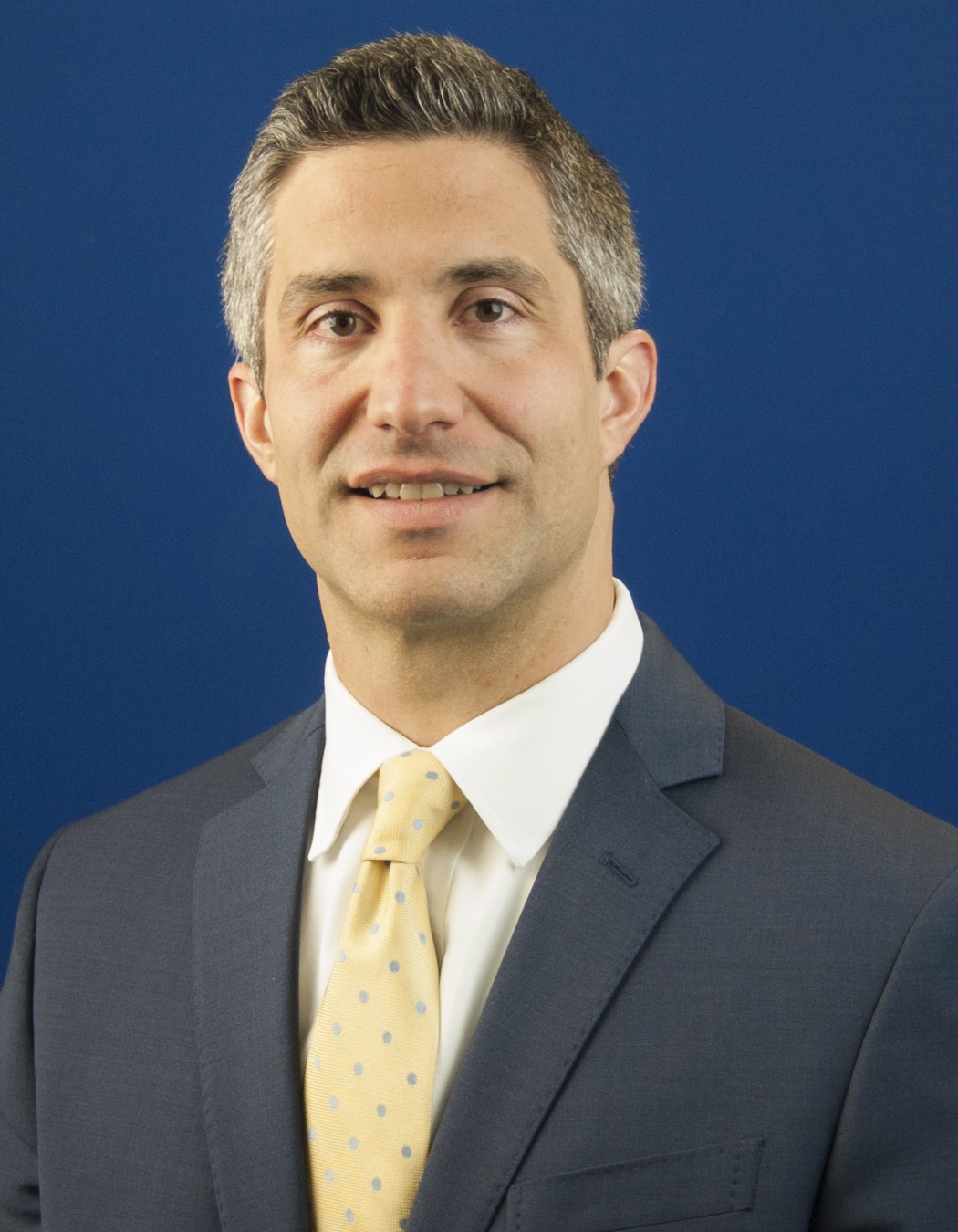 In 2018, the Oregon Legislature followed in the footsteps of California and passed a law creating the Oregon Prescription Drug Price Transparency program. The program is administered by Oregon’s Department of Business and Consumer Services which is led by Director Andrew Stolfi.

The program has been able to provide policymakers and consumers in Oregon crucial information about one of the most complicated policy areas in health care – pharmaceuticals. The program is now a partner to a newly created Prescription Drug Affordability Board which is a concept that is becoming popular in several other states. We checked in with Director Stolfi to get his perspective on the two programs:

There are many arguments questioning the value of a state-based drug pricing transparency  program. Some say disclosing pricing information violates trade secrets and hurts competition. Others argue that transparency does nothing to lower the cost of drugs. What value do you believe the program delivers to consumers and lawmakers?

DCBS believes in the inherent value of transparency of drug pricing information as a consumer protection agency. The Drug Pricing Transparency Program’s (DPT) annual report and hearing provide important information and context about the dynamic marketplace for prescription drugs for consumers and legislators.

While some may suggest that transparency does nothing to lower the cost of prescription drugs, it provides a base level understanding of drugs costs that otherwise would not be possible in an opaque marketplace. To that end, it is hard to understand assertions the program hurts competition. Arguably, through transparency of pricing and the supply chain, it actually promotes competition. The program also does not disclose trade secrets and the law provides for conditionally exempting from disclosure information submitted that is determined to be trade secret.

Our drug pricing transparency program is also not singularly focused on drug manufacturers. It includes manufacturers, pharmacy benefit managers, insurance carriers, drug wholesalers, pharmacies, and others. The program’s legislative intent was “to provide notice and disclosure of information relating to the cost and pricing of prescription drugs in order to provide accountability for prescription drug pricing.” Much of this work is in fact pioneering. When understood in the context of the adage, “you don’t know what you don’t know,” there is inherent value in understanding the marketplace to develop new policy recommendations that promote accountability and offer cost containment strategies for government and private sector purchasers.

You have been at the Department of Consumer and Business Services since the inception of the program and now have received multiple years of drug pricing data. Has anything surprised you from the reporting your team has received?

Processing the volume of data has been a challenge for our team as both manufacturer and carrier reporting is complex. We are always looking for ways to improve processes and remove administrative burden for reporters while trying to improve data quality. We are obligated to review a lot of information and have found that a lot of data claimed to be trade secret by manufacturers are in fact publicly available.

To the question of anything surprising us, I would say the frequency and volume of some manufacturers’ submissions being categorically labeled as trade secret has been a bit of a surprise. We believe this strategy of overclaiming trade secret is an effort to be overprotective of this information. To that point, staff has seen an uptake in third-party entities that prepare filings for state transparency programs.

In a particular instance, staff were told by a third-party entity, “We are told by our clients to provide as little as possible and try to make sure no information is disclosed. Therefore, we have marked all fields allowed as trade secret.” This attempt at subverting transparency has both created backlogs of trade secret reviews that are unnecessary but for the manufacturer’s attempts to obfuscate transparency in pricing information. As such, the team is leaning into submitted data that is not compliant with reporting requirements.

We have added a compliance specialist to work with the division’s compliance and enforcement unit and the Department of Justice to address manufacturer noncompliance and blanket labeling of submissions as trade secrets when claimed information is publicly available online. On a parallel path, staff is working with manufacturers to provide meaningful information and technical assistance to help promote voluntary compliance and accurate data submissions. To that point, our team will be refreshing training materials for both kinds of submitters and conducting training webinars early next year.

In your annual hearing last year your team was able to invite experts to present on issues like patient assistance programs and the impact of Aduhelm. Both presentations were effective because they brought forward credible voices who have no stake in the pharmacy space. How have Oregon legislators reacted to these presentations? Do you anticipate your annual hearings will continue to bring forward third-party experts in future hearings?

We believe it is imperative to bring forward third-party experts from Oregon and around the country to surface the critical issues around prescription drug costs. Legislators who have participated maintain a keen interest in the complex policy issues and hearing recommendations on policy levers to address costs.

The hearing also represents an important opportunity for the program to share findings from its annual report on manufacturer and carrier reported data, and policy recommendations to the legislature. The hearing represents an important opportunity to expand upon the DPT Program’s global policy recommendation to promote transparency across the pharmaceutical supply chain to better understand how entities across the supply chain influence price to consumers, either at the pharmacy counter, through the consumer’s health insurance premiums, or how drug costs contribute to overall health care system cost.

The 2022 annual hearing will include panel presentations and discussions on the supply chain and PBM rebate transparency, in addition to recent developments around insulin pricing and affordability.

This year the Drug Price Transparency Program is working hand in hand with the newly created Prescription Drug Affordability Board. How is the integration of these two programs going?

The Prescription Drug Affordability Board (PDAB) is an entirely new program and is very much a work in progress. The PDAB will not be fully seated and fully supported by a professional staff until late September. As with any new program, it is working through growing pains in the challenging labor market with recruiting a talented and diverse team.

The PDAB kicked off in late June and focused early work on establishing operational policies and procedures while also developing a workplan to meet legislative reporting requirements. The charge of the PDAB is a clear directive from the legislature, “to protect residents of this state, state and local governments, commercial health plans, health care providers, pharmacies licensed in this state and other stakeholders within the health care system in this state from the high costs of prescription drugs.”

As a work in progress, we are evaluating the alignment of the two programs and what integration should look like given each program has a different mandate. To that point, the board is focused on costs for consumers and the health care system, whereas the DPT Program receives threshold-driven information from manufacturers and carriers based on defined criteria, e.g. price increases and new product launches. In contemplating “integration,” the PDAB project manager participates in weekly DPT staff meetings to track possible opportunities for alignment, collaboration, and data sharing.

There certainly are opportunities to consider as we move along the maturation curve. While the agency would need legislative authority to pursue them, there are several that make a lot of sense in the context of integration. Given the DPT Program is mandated to collect specific threshold-driven information around price increases and new product launches that can include some very expensive drugs that have fairly low utilization, a logical opportunity would be for the PDAB to recommend looking at a specific class of drugs or subset of drugs for manufacturer and carrier reporting.

Similarly, in the PDAB’s work to understand the entirety of the supply chain and where costs lie, the DPT program having authority to collect information from PBMs related to rebates and additional information related to patient assistance programs could complement the PDAB’s efforts and ability to make meaningful recommendations to the legislature.

With the Inflation Reduction Act now signed into law with a focus on drug prices in Medicare, can you predict how the law will impact state policy debates in the commercial markets?

It is too early to know how the law will ultimately impact state policy debates in commercial markets. The runway to implementation of the full bill is 2-4 years and much of the law will be implemented under guidance and rules written by CMS.

State policymakers may view Medicare negotiation as a great start to constraining drug costs rather than the end of the effort. The federal law could spur more state action on prescription costs since the price negotiation applies only to Medicare, but the negotiated price will be public and potentially actionable for states and private payers.

If Oregon had authority to implement Upper Payment Limits (UPLs), the state could use those negotiated prices to set statewide UPLs that would extend Medicare's work to all state residents. The Medicare-negotiated price could also be a benchmark for commercial and state government payers for rebate negotiations.

It also seems likely that the Medicare law/negotiation program will spur faster development of biosimilars for drugs targeted by Medicare for negotiation. More biosimilars will improve price competition in therapeutic classes which could lead to successful state-level price concession negotiations for costly biologics.

Vince joined Regence in 2017 as Director of Oregon Government Affairs. In that role he worked on several key pieces of legislation including the creation of Oregon’s Drug Price Transparency Program and the Sustainable Health Care Cost Containment Program. Previous to his tenure at Regence Vince was the Jobs and Economy Policy Advisor to Governor John Kitzhaber and Governor Kate Brown.

Andrew R. Stolfi was appointed Department of Consumer and Business Services director in April 2020. He is also the state’s insurance commissioner. He began with the department in February 2018 as Division of Financial Regulation administrator and insurance commissioner. Previously, Andrew spent six years in Switzerland at the International Association of Insurance Supervisors in a variety of roles, including chief operating officer and chief counsel. He held various senior management roles at the Illinois Department of Insurance, including acting director, chief of staff, and special counsel for policy and legislative affairs. His legal background includes serving as attorney and policy analyst in the Office of the Governor of the State of Illinois; judicial law clerk for the Honorable Thomas E. Hoffman in the Illinois Appellate Court, First District; and a special assistant corporation counsel for the City of Chicago Law Department.