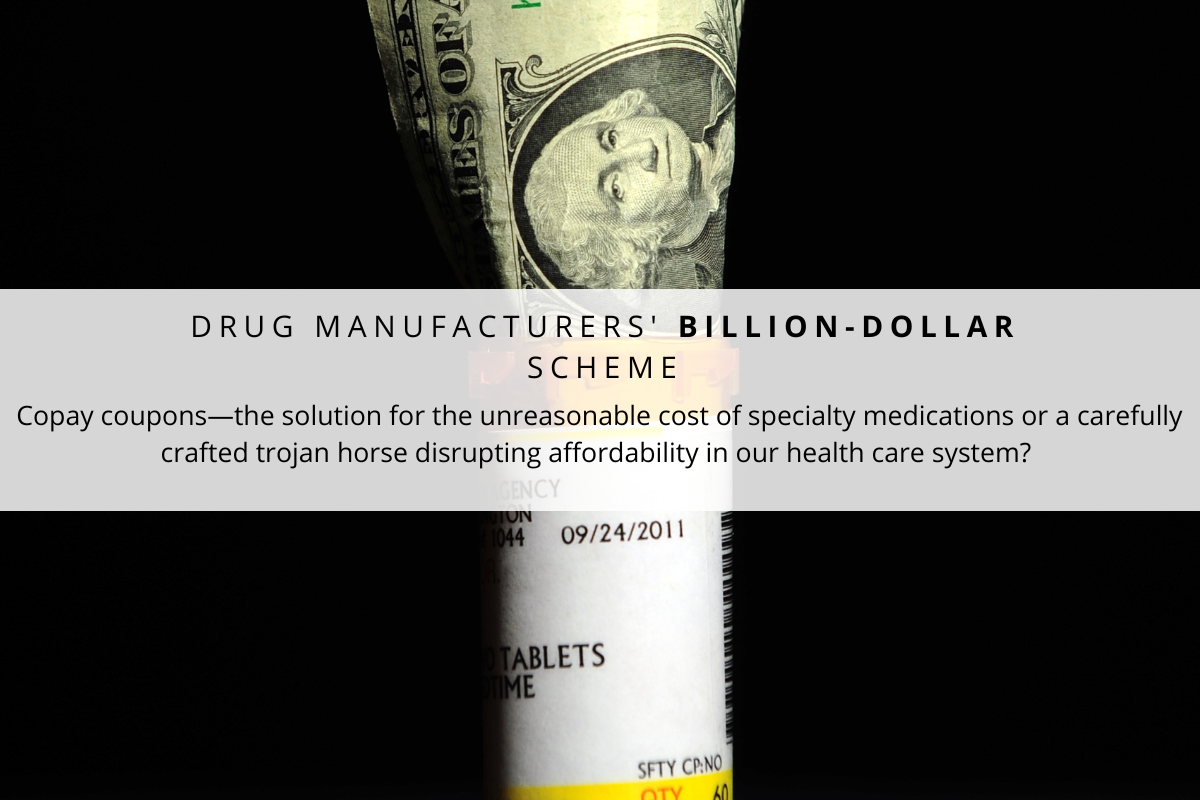 Patients in the United States unfairly pay twice as much for their prescriptions compared to 32 other developed countries. [1] Many prescriptions in the U.S. are unattainable for patients because of their high cost, so manufacturers utilize copay coupons to defray the unreasonable cost of their drugs on consumers.

Coupons are given to patients either directly or through nonprofit foundations, providers, or pharmaceutical companies to help them afford high-cost prescription drugs. The coupons will often cover a patient’s financial responsibility at the pharmacy (i.e. deductible or copay), often 10-20 percent of the drug price, after which the patient’s health plan is charged the other 80-90 percent of the cost of the drug. [2]

While copay coupon programs were allegedly intended to help patients afford expensive medications, they rather serve as public relations, marketing, sales, and revenue tactics. [3] They are touted as life-saving heroism, allowing patients the opportunity to afford much-needed medications; but in reality, they bolster manufacturers’ ever-increasing revenue targets and incentivize patients to continue to use expensive treatments.

According to the Pharmaceutical Care Management Association, if copay coupons continue to proliferate in the market, they will increase prescription drug costs by $32 billion within a ten-year period for employers, unions, and other plan sponsors, while only costing manufacturers $4 billion each year—earning them between a 4:1 to 6:1 return on investment. [4]

Manufacturers use programs, like copay coupons, as a tactic to bait patients to use their drugs, while providing a distraction from unreasonably constant drug price increases. For this reason, coupons are attractive to manufacturers, even though they understand that lower drug prices would better alleviate patient cost burden. [5] Over the years, drug manufacturers have aggressively raised prices on existing drugs and have continuously raised the bar for the price of launching drugs. A profound reason for this is that many manufacturers have compensation structures tying incentive payments to revenue and other financial targets. [6] In the five-year period from 2016 to 2020, manufacturers raised brand-name drug costs by 36%—almost four times the inflation rate during that same time. [7]

According to the U.S. Oversight Committee Drug Pricing Investigation, “These practices persist because the highly complex U.S. pharmaceutical market creates perverse incentives to raise prices, and unlike in other countries, drug companies can do so without limitation.” The Committee’s investigation included 10 manufacturers and 12 different drugs and found all 10 manufacturers raised the prices of those 12 drugs more than 250 times, with the median of those drugs being almost 500% higher than when they were brought to market. [8] Once drugs become completely unattainable for the general population, manufacturers utilize copay coupons to allow patients to be able to afford these medications at the counter, while making payers (e.g. health plans and employers) carry the cost-burden for the rest of the medication once the cost-sharing portion is out of the way for the patient.

Manufacturers also implement copay coupons as a loss-of-exclusivity strategy when their drugs are about to lose patent exclusivity. Coupons incentivize and keep patients routinely using high-cost, brand-name drugs over more affordable and equally effective alternatives that are or will become available. Coupons are within easy reach, especially when alternatives exist or ahead of a generic or biosimilar launch and are intended to steer patients away from the less-expensive generics or biosimilars. [9] Yet as patients provide their loyalty, copay coupons expire, leaving patients bound to the high cost because prescribers are less inclined to make changes well into a treatment plan.

Studies have shown copay coupon programs decrease generic utilization, leading to a 60+ percent increase in brand-name drug utilization. [10] By offering coupons directly to consumers, manufacturers circumvent health plan design to lower out-of-pocket expenses by steering patients toward more expensive drugs and away from the cost-saving strategies tied to generic drugs and biosimilars. National spending on drugs grew an average of $30 to $120 million for each copay coupon on a particular drug over a five-year period following the entry of a generic competitor. [11]

As plans are forced to pay an increasingly exorbitant amount for prescriptions— the unwanted but necessary effect is rising costs for members by means of increased cost sharing (premiums, copays, and deductibles). According to Elisabeth Rosenthal in an LA Times Op-Ed, Is my copay coupon charity—or a bribe?, “At a systemic level, these programs [copay coupons] create a mirage that perpetuates our system’s reckless spending: They cover up a drug’s true price, much of which insurers pay…and that contributes to our escalating insurance premiums and deductibles year after year.”

Government insurance programs such as Medicare and Medicaid have banned copay coupons as a form of an illegal kickback. [12] Medicare’s ban on copay coupons saved the Part D program an estimated $18 billion between 2012 and 2021. [13] As copay coupons raise spending for health insurers, some insurers have turned to copay accumulator programs that disallow copay coupons from counting toward members’ deductibles or out-of-pocket maximums.

When manufacturers circumvent plan design, they obviate plans’ abilities to encourage lower-cost options. In the absence of appropriate cost sharing, e.g., the copay, members are insulated from their payment obligation and lack incentives to make cost-efficient choices. Insurer accumulator programs help restore the balance in the system by allowing patients to use the coupon to save money at the pharmacy counter, but they do not count the cost of the drug that the manufacturer paid for the drug through the copay coupon toward the patient’s deductible or out-of-pocket maximum. When an outside party pays the deductible for a member, it removes a meaningful obligation to a plan design that the member has entered with their insurance provider. Having the cost share is what impacts purchasing behaviors of the member and when they do not have to pay it, it creates an imbalanced financial burden for the plan, and ultimately for all members.

Copay accumulator programs are imperfect as they shift the burden of unaffordable costs back onto members. Insurers have attempted to make payment solutions work for both plans and members; however, until the high cost of drugs is addressed, many solutions merely bandage a festering wound.

There are many patient advocacy groups which aggressively support legislation and legal actions that directly benefit pharmaceutical manufacturers. These patient advocacy and charity groups are financially motivated to push manufacturer-supporting legislation, even though some of the outcomes actually hurt patients. Per current federal regulations, manufacturers can make tax-deductible donations to patient assistance charities which are not publicly reported. [14] Some of these charities receive most of their funding from pharmaceutical manufacturers. [15]

In August 2022, a coalition of advocacy groups led by the HIV and Hepatitis Policy Institute filed a lawsuit against the Department of Health and Human Services, challenging part of the final rule that allows insurers to continue to use accumulator programs. The lawsuit alleges that the federal policy allows insurance companies and pharmacy benefit managers to collect funds from both patients and manufacturers while not alleviating patient burden. [16]

Pharmaceutical manufacturers are highly motivated to preserve the usability of their copay coupons in the marketplace. Because of this, many efforts to negate the viability of accumulator programs are in fact backed by PhRMA with the façade being patient advocacy groups, such as the HIV and Hepatitis Policy Institute. According to tax data, the total annual contributions to the seven largest independent patient assistance charities was roughly $1.85 billion in 2018; [17] however, this financial relationship between patient charities and PhRMA is not readily transparent.

While some states are interested in looking into the overall affordability of prescriptions, they are simultaneously passing legislation that perpetuates mal-intended players in the health care arena. PhRMA continues to push for copay accumulator ban bills in states, and as of June 2022, 14 states and Puerto Rico have passed laws to address the use of copay accumulator programs, requiring that any payment made on behalf of patients be applied to their annual out-of-pocket cost sharing requirement. [20] While the short-term effect of allowing copay coupons to proliferate may temporarily help patients, their dire, downstream effects will continue to erode the affordability of our health care system.

It is inarguable that copay coupons are a vehicle for drug manufacturers to increase their revenue. While they appear altruistic, they distort the market by supporting the overutilization of higher-cost, brand-name drugs when alternatives are often available. [21]

Looking into the future of copay coupon policymaking, optimal legislation should take the following into consideration:

Additionally, a requirement for manufacturers to be transparent and defend their pricing models might ultimately improve pricing structures.

Creating solutions for drug pricing that do not involve shifting the cost burden onto plans and patients would create a more stable health care system and one where patients are able to receive the care they need when they need it. While coupons are a common tool to help patients receive the treatments they need, the fact that insurers pick up most of the cost for the most expensive treatments implies a significant impact of these practices onto insurers, employers, and members. [22]

[13] Visante Copay Coupon Study. “How Copay Coupons Could Raise Prescription Drug Costs by $32 Billion Over the Next Decade.” October 2011.

Julie joined Regence in 2019. As a Public Policy Specialist, she helps the State Affairs team plan, strategize, and communicate public policy positions as they relate to the business and members. Prior to joining Regence, she worked in a research position at the Portland State University health center and at the Oregon hospital association where she engaged in member communications.